I spent most of yesterday afternoon deliberately not paying too much to the news and with good reason. I KNEW it would trigger me pretty hard. When I say trigger I don’t necessarily mean that every triggering event leads to a sobbing, gooey heap of sog. Sometimes it can manifest as deep burning anger, something akin to rage. Sometimes it  manifests as though I have suddenly come down with the Spanish Flu and Ebola at the same time with a side of migraine. I was good until after work when I OD’ed on the news. I opened up the news apps on my phone and began to read. I had the thought to turn down the volume and that helped in the moment. What really threw the switch for me was Kavanagh raging and demanding he was the victim and Lindsey Graham pretty much doing the same.

But you know what? Most perpetrators of rape and sexual assault call their accusers lying bitches. . . and when I say most really do mean close to 99% of them. I don’t have the math on that because I don’t think the numbers are recorded in that direction. No one keeps record of all the times that those who were shown to be guilty started off their cases saying nah man. . . that bitch is lying because she blah blah blah, envy hate puke. But they do keep record of how many accusations are false and as Fire Lyte aptly points out, even those numbers are seriously problematic.

It’s hard for me to fully fathom how the actual numbers of real false accusations is so small, but how large the accusations of false reporting is so overwhelmingly bloated. It’s even harder to comprehend why anyone listens to that garbage when the numbers are such as they are. Mind blowing really. Are we so programmed to listen to and believe men blindly and ignore the words women speak??? That’s got to change. Society does not get to blatantly ignore 50% of its population or try to drive them into silence by screaming #HimToo. It may be time for some men to take their own advice: sit down and shut up. Maybe opening your ears to actually hear what is going on would be helpful as well.

I don’t know if anyone remembers this, but in the beginning of his nomination tap there was an incident where the father of one of the Parkland shooting victims in Florida went to shake his hand. Kavanagh looked at the gentleman with disdain and walked away with out so much as a thought. Remember the phrase watch how a man treats the waiter and janitor to tell his caliber??? This applies. If he treats someone as though s/he is beneath him run from this man. . . do not look back or second guess. This in the therapy world is called a Superiority Complex.

Kavanagh has been heard stating that it was legal for him to drink while in his senior year of high school. That was not the case:

What was the legal drinking age in Maryland in 1982?
But Maryland’s minimum legal drinking age for beer and wine was changed to 21from 18 in July 1982, during the summer before Kavanaugh’s senior year. It was already 21 for hard liquor.3 days ago

Kavanaugh incorrectly suggests legal for him to drink in high school …

https://www.businessinsider.com/maryland-drinking-age-could-brett-kavanaugh-legally-&#8230;
Search for: What was the legal drinking age in Maryland in 1982?

The age had been raised from 18 to 21. . . and wasn’t he 17??? perpetrators, including my own, will lie and hope that you do not catch on to it when it suits them. And even more fun, later when you catch up to the facts of the situation and call them out, they tell you that you misheard them, misinterpreted them or even more fun than that, they never said any such thing. I’ve not heard any commentary by Kavanagh about the legal drinking age thing. . . not yet anyway.

Another tell of this situation with Kavanagh is that while it may never be actually proven or prosecutable that he sexually assaulted Professor Ford, he sat up in front of the Nation cried and raged about how his life was ruined. perpetrators of sexual assault and even domestic violence play the victim card. It’s an oldie, but a goodie. They will cry crocodile tears, rant and rave, and point the finger at everyone else and everything else as the reason for their demise not once taking accountability for their actions or the damage they caused. How dare you, becomes their favorite mantra right before they spout off all reasons this is your fault and your own doing.

So keeping score here as far as my therapy and experiences with an abuser here are the numbers: 1. Over inflated sense of self, 2. Tells lies to preserve his image, 3. played the victim card. 4. May be denying accountability for actions against Ford and potentially others, 5. exhibits narcissistic rages when confronted with misdeeds how ever large or small.

I think. if anything, if these be” lying bitches”, they have done us all the favor of making Kavanagh’s good man mask fall to the floor on National TV. This enough for me to never want to encounter this particular individual on ANY level for ANY reason. Anyone who has been through domestic violence and sexual abuse/rape would probably recognize these sorts of behavior and flee as fast as they could. Based upon my experience as a survivor and the experiences of my fellow survivors, these are a few of the things that indicate that there may be deeper issues that only his family may understand and certainly reasons for him to not be placed upon the bench in the highest court in this land.

Well. . . as I understand it, the FBI may be tasked very soon to go digging. I think I got witching to do. . . they may need some weird, divine fringe event to help them. Can’t hurt to ask. Witch out!

And it rained all day. It was not a rain that poured down. It was a slow drizzle that eventually and thoroughly soaked everything. It’s sort of how I feel about all the news I have been seeing about the case being made against a certain Federal judge up for an even larger position. At first I was worried about this just being a stunt from one side to smear the other using women, once more, as pawns in a larger game. I was worried that it would compromise every woman who had ever had a man in power ( or thinks they are in power) abuse them and their claims would be summarily written off. Now that I have waited this out and have read the statements, I have a mix of nausea, disdain, and horror sitting in me. I am sure I am not alone.

Here is a woman who has held her tongue for so long trying to forget what this man did to her and is now forced to dig up that horrific moment and relive it in front of an entire nation. While this man continued on with his life pretending he did nothing wrong, she has had to struggle with the darkness and weight that comes with this kind of violation of your being.

I get why she didn’t report on a very personal level. Reporting is just as violating as the act perpetrated against you. Depending on the circumstances, you will be summarily dismissed as a vengeful liar and be called as much by the offending party who will push back with vehement claims of innocence. That is just as brutal as the act done to you. The smear campaign against you at this point is just starting. There will be retaliation that only a guilty person can punish you with. Not to mention what misguided friends and followers will take their own initiative to perpetrate. It’s not just ugly. It’s inhumane. She had plenty of reason to hesitate in reporting much less following through with stepping forward.

I, for one, support her. I’m not sure that means anything to her, but her courage means so much to me. I have been giving some thought this afternoon while watching the rain come down how best to serve her. I have thought of some pretty ugly things to do to federal judge shaped voodoo dolls, but ultimately I know those things will not serve her well. I think what she needs most is loving support that only those close to her can provide and a whole crap tons of protection. This incident has brought about some pretty volatile reactions and emotions on both side of the fence.

We are all watching. Some of us may turn blue because we have forgotten to breathe. (Remind your loved ones who have looks of horror on their faces to breathe please.) We are all watching some of us hoping that vindication is on the way, if not for ourselves, but for one of us. I’m still rolling around in my head just how I want to approach the working on Professor Ford’s behalf. I have some time carved out to talk with Hekate and get a wider perspective on what actually needs to be done. 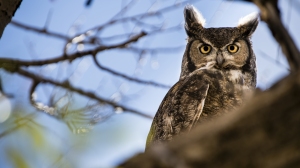 What I do know is that the smear campaign against her is just starting if my experience is any clue. Professor Ford will need an army beside her. There is an owl outside calling into the darkness as I type this. It makes me remember that they are able to see what others cannot and are silent hunters. No one saw this incident come. Maybe there is some larger hands than those of humanity behind this.

Dear Professor Ford, You do not walk alone. Your voice has been heard. Your voice will carry on the ripples on the waters surface to many shores and be picked up by other women and their loved ones to be spread.

The owl is still calling. I am getting the feeling it is time for me to go and have a conversation with the messenger’s Mistress.